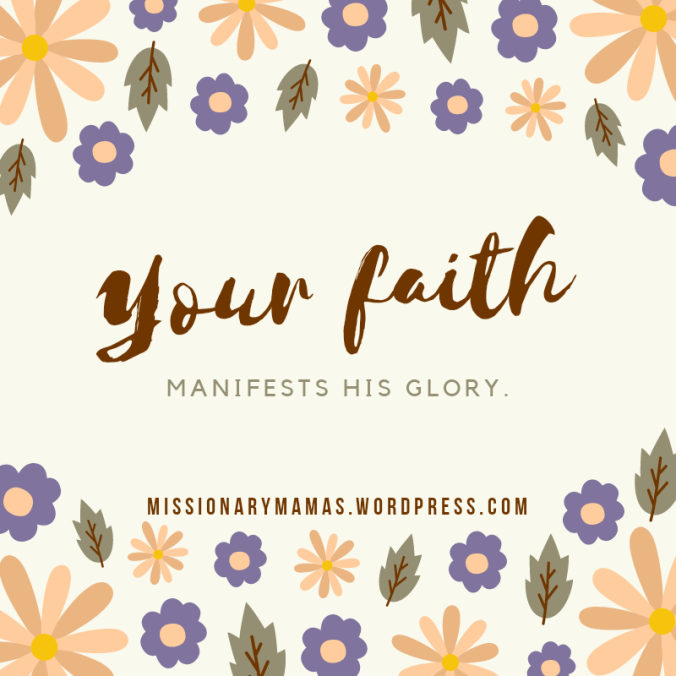 I’m reading through John 2 as part of this month’s Inscribe the Word study from A Symphony of Praise. (Yes, I’ve already started August…not because I’m ahead, but because if I don’t get a head start, I won’t even finish half of it. #momlife) And I was struck how we don’t find out exactly when the water turns into wine…is it when they draw it from the jars? When they take it to him? When he goes to put the cup to his lips? We don’t know. And that’s the thing about faith, right? Sometimes it doesn’t “work” like we want it to. But long obedience in the right direction showed God’s power and goodness based on the strength of their faith.

And it will for you, too. Don’t lose heart.

Also. God likes good wine, so if you do too, that may count as godliness. Do yourself a favor and be godly tonight once the kids are in bed. You totally deserve it.

You’ve got this, mamas.

The world’s overwhelming sometimes, huh? Small people depending on you every moment of the day, big people depending on you lots of moments of the day…and maybe there’s a heavy issue weighing on your heart. Something that’s making it hard to put one foot in front of the other. Maybe it’s making it hard to pick a direction at all. You’re not sure how to help, or if you even can…

Times like these, I need a good word from Elisabeth Elliot, a missionary mama who’s gone on to glory. Colleen Chao wrote a wonderful reflection on this old Saxon poem that she first heard from Elisabeth. If you have little time, read hers instead of mine–it’s way better.

Do it with prayer;

Do it with reverence,

Who placed it before thee with

DO THE NEXT THING.

I love this. I love it because so many times, I haven’t been able to see far enough down the road for my taste. Sure, I want to follow the Lord…but where’s He going, anyway? Sure, I want to love my neighbor…but I’ll let someone else do it first to make sure it’s safe, to make sure I know how it’s going to turn out.

I know resultings isn’t a word, but isn’t this a precious thought? That we can leave the outcome of our ministry in his hands? No, you probably can’t put that in your prayer letter, but I think you can let it take root in your heart. Trust Him to lead you. Trust Him to use you. Trust Him to give you the strength to call the person you’ve been avoiding, or sit up with a sick baby that isn’t yours, or link arms with your neighbor or whatever the next thing may be. It’s okay if it’s a small thing…but do the next thing.

I think of Moses’ mama, watching that basket float away with her baby in it, only to get him right back. If his mama hadn’t done the next thing…then what? God would’ve used someone else, but Moses was so perfectly placed to play the role that God called him to. Her obedience was so fruitful–even for us, since Moses wrote so much of the Old Testament!

It’s time for courage. If you don’t have it yet, fix your eyes on Jesus, and I know you’ll find it in due time. I made you a reminder for your phone’s lock screen, in case you needed it today, like I did.

One foot in front of the other; maybe trembling, even stumbling, but always moving forward, even if it’s by inches.

You’ve got this, mama.